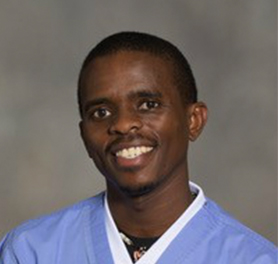 In early 2012, Oscar Njihi sat at a desk doing his job: handling the financial aspects of foreclosures at a law firm. The job wasn’t glamorous, but for the Kenyan native it seemed like the next right step towards a successful start in business. Little did Njihi know that only a few short months later, not only would his career path change, but so would his definition of success.

The deaths of both his father and brother sparked the bold decision to switch his profession to nursing, according to Njihi (pictured left). Specifically, it was the cardiac care nurses caring for his family members who made the everlasting impact.

“I realized what an amazing value these nurses were providing to others – they held the power to comfort and inform during times of crisis. It shifted my perspective and I understood then that the point of this short life is to add value to the lives of others. I found the why behind the what,” he said.

Njihi ended his job in finance and enrolled at the Barnes-Jewish Goldfarb School of Nursing in St. Louis, MO, where he graduated with a Bachelor of Science in Nursing Program (BSN) in 2014. After realizing early in his newfound career that the Emergency Department was where he wanted to be – and with less than two years at the bedside at Wesley Long Community Hospital Emergency Department in Greensboro, NC,- Njihi was encouraged by his supervisor to obtain a  Board of Certification for Emergency Nurse (BCEN®) Certified Emergency Nursing (CEN®) certification.

A self-confessed “terrible test taker,” Njihi was intrigued by obtaining certification solely for the purpose of expanding his knowledge-base but was concerned over actually sitting for the exam. He decided to take the process slowly, extending his original three-month study plan to six. During this time, he found the materials he was studying every night begin to come alive in his daily interactions with patients – helping him connect words on the page to real life examples and situations. With his confidence boosted, Njihi finally sat for the CEN exam…and failed.

While initially disappointed, Njihi’s dedication to knowledge would not waiver. Rather than viewing not passing as a failure, he instead saw it as an opportunity to learn more, learn better, and to grow.  “A mentor of mine once said, ‘The moment you stop growing is the moment you start dying.’ And I have no intention of letting that happen.”

Njihi took the CEN exam for the second time in 2015 and passed. One year later, he obtained his Trauma Certified Registered Nurse (TCRN®) certification. While Njihi is far too modest to admit how obtaining certification has caused a ripple effect within his department, the numbers speak for themselves: Wesley Long’s 2016 stats report a 38 percent increase of certified ED nurses.

According to Njihi, talking about his failure has actually encouraged others to get past their own test anxiety. “It humanizes this big scary test and shows people that success really can hide in failure if you know where to look. Not only does it help you get over the initial fear of taking the test, but it helps you better understand your strengths and weaknesses for next time, and sets you up for future success,” he said.