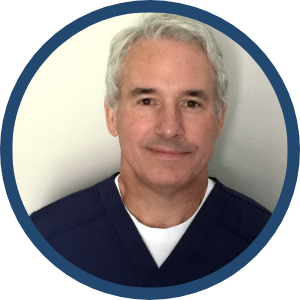 BCEN’s first EDvantage certificate holder, Rick Yadon, did not take a “traditional” path to a career in emergency nursing. With 20+ years on the business side of healthcare and his own company that searches for and places healthcare executives in managed care companies around the country, Rick is not new to the industry.

We had the opportunity to sit down with Rick and talk about what brought him to the BCEN EDvantage program.

After years of fulfilling other professional goals, he felt uninspired and unchallenged in his career. He knew he needed a change – but wasn’t sure which direction to go. After some strategic thinking and soul searching, he decided he wanted to stay in healthcare. He knew this would be his last career change and he wanted to do something that would have a practical and tangible impact on people’s lives.

It was time to serve others. What better way to do that than a career in emergency nursing!

Rick signed up for a two-year program at Columbia State Community College to achieve his RN license. In his preparation for his last semester, he sought out additional resources to improve his chances in the ED. In his search, he found the BCEN EDvantage certificate program, full of in-person and online training courses and critical-thinking assignments to get him prepared for his new ED career. He decided to complete it! He is on track to graduate December 2020 and already applied to pursue his BSN in 2021.

He has been applying to positions and residencies within the ED and is set to start his interview process in the fall. He is determined to accomplish his goals so he can start practicing the fulfilling art of emergency nursing.

Rick has been very proactive with networking and making sure he is the most competitive applicant for the ED this fall. Through talking to ED leaders, he heard about BCEN® and the Certified Emergency Nurse (CEN®) credential. After realizing he needed two years of experience in the ED before applying for that certification, he looked through other resources from BCEN to see if anything else would suit his needs. The BCEN EDvantage certificate program had just launched and was specifically created for nurses trying to get into the ED. He realized it was perfect for him!

He was able to complete the BCEN EDvantage program in less than 2 months and is the first person ever to achieve his BCEN EDvantage certificate. He was “excited to be better prepared for my new career path and have a solid advantage over other applicants this fall.”

Between his background in healthcare, his go-getter attitude, and BCEN EDvantage under his belt, we look forward to keeping up with Rick’s journey to becoming an emergency nurse!