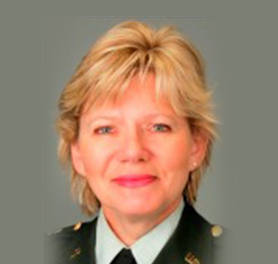 The journey through the world of nursing reads like a captivating novel for Sandra Fonkert, MSN-Ed, RN, CEN®, CPEN®, TCRN®.

Over the next few years, she held many positions within the hospital: clinical staff nurse, nurse manager, nurse educator and nurse interim. In 1994, Fonkert returned to graduate school to earn her Master of Science in Nursing Education, which she obtained in 2002.

Fonkert considers her military career as the beginning of a new chapter of her life story. After waking up one day at age 39 with the realization that she was not married and did not have children, Fonkert said there was nothing holding her back from doing something she had always wanted to do: join the military.

Fonkert said the climate of the times – February 1991, the center of the Gulf War and Operation Desert Storm – amplified her feelings of patriotism and encouraged her to call a military recruiter to discuss filling out the necessary paperwork. Congress approved her application in August of that same year, providing her a direct commission to the Army Nurse Corps (ANC).

ANC is the nursing service composed entirely of RNs for the U.S. Army, providing highly qualified nursing staff in support of the Department of Defense medical plans. According to the U.S. Army, ANC officers are responsible for caring for an entire population by working with the military community by monitoring the spread of disease, watching for hazards and raising public awareness for good health.

Fonkert credits her involvement with the ANC with providing a symbiotic relationship between her civilian career and her military career, as its emphasis on education meshed with her own views on bettering oneself. This encouragement is what ultimately led Fonkert to earning her CEN, CPEN and TCRN certifications.

In 2003, she was mobilized to active duty. She realized after receiving her orders for Iraq, she was not eligible to work as an emergency nurse, but instead assigned as an ICU nurse – all because she did not hold her CEN certification.

“Rest assured, four months after returning home, I studied hard and earned that certification. I was never going to let that situation happen again,” she said.

Obtaining her CEN gave Fonkert the motivation to go on to earn her CPEN and TCRN certifications.

“I think there is this fear of failure that takes over in adult learners that can be hard to shake. But after gaining the confidence of passing the CEN exam, it was a natural progression to challenge myself and earn the CPEN and TCRN,” she said.

Fonkert, who retired as a Lieutenant Colonel from the ANC in 2011, describes her military career as a rewarding, fascinating and challenging experience. Her ultimate takeaway was what she learned from those she worked with in the ANC.

“The military attracts a certain ilk of individuals who really want to make a contribution and help others. Seeing that passion in action is inspiring,” she said.

But Fonkert doesn’t plan to have her story stop there. She has been an active member of the CEN ECRC since 2007, a position she was encouraged to become involved with after receiving a ‘Call for CEN Item Writers’ email from BCEN.

In addition to her current position as a clinical staff nurse at M Health – a location she has worked at throughout her civilian and military career, spanning 43 years – she also teaches a Trauma Nursing Core Course, Emergency Nursing Pediatric Course, and a Nursing Triage Course at the hospital.

“I think I’m entering into a new chapter of my career now and I’m excited to see where it takes me.”