OAK BROOK, IL (January 29, 2021) – The Board of Certification for Emergency Nursing (BCEN), the benchmark for board certification across the emergency nursing spectrum, today released its first annual report, “2020: Year in Review,” which features highlights of BCEN’s 40th anniversary year. BCEN also announced the promotion of its executive director, Janie Schumaker, to the position of CEO. 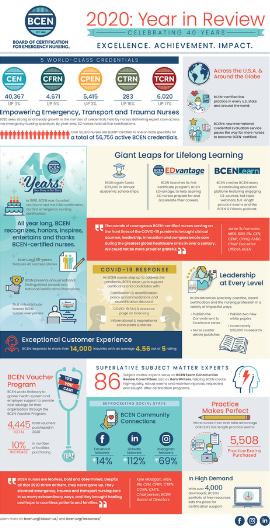 Against a backdrop of overall steady growth across all five credentialing programs, nurse and employer pursuit and valuation of BCEN certification continued to rise, as evidenced by:

To review all of the 2020 accomplishments and statistics in BCEN’s “Celebrating 40 Years”-themed annual report infographic, please visit https://bcen.org/publications/#annual-report/

BCEN also announced that Janie Schumaker, who has served as executive director since December 2017, was promoted to CEO effective January 1, 2021. Schumaker is also currently serving a two-year term as president of the American Board of Nursing Specialties (ABNS), whose membership of over 30 certification boards represents over 1 million specialty certified nurses worldwide.

“This promotion recognizes Janie’s leadership, the great strides and accomplishments that have taken place under her vision and guidance, and BCEN’s strong growth trajectory,” said BCEN Board Chairperson Kyle